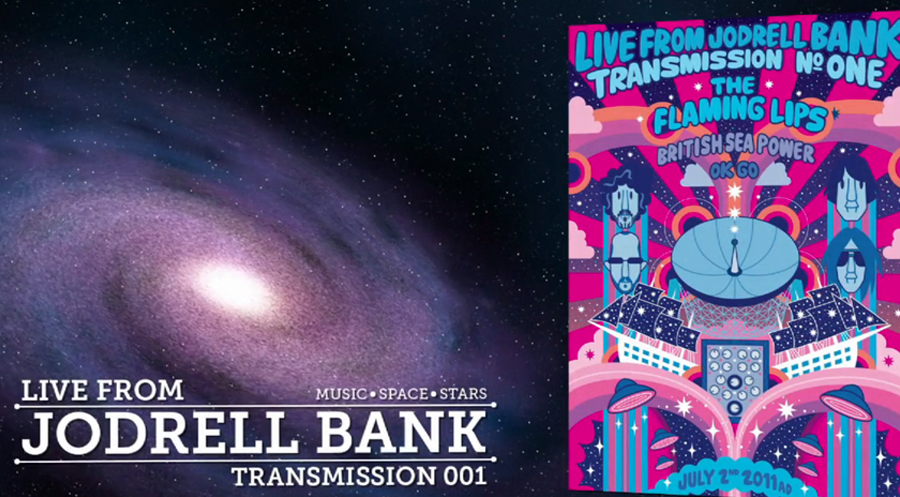 Ear to the Ground asked us to come up with a 3 minute intro for a pilot festival at the Jodrell Bank site. The piece was to be projected onto the telescope itself, a surface of 1.3 acres, prior to the final set of the night, the suitably out there Flaming Lips.

The initial brief was very loose but given the huge presence of the telescope it seemed a good opportunity for a potted history, a bit of science and some geeky references.

We wanted to represent Sir Bernard Lovell, the man behind the construction of Jodrell, in a serious but cool way, so we took a hexadecimal representation of his voice from the telescopes first transmission : “I’m Bernard Lovell, sitting in the control room of Jodrell Bank”, took screenshots of this, made an infinity field from it and moved a virtual camera through it, as if through space. It seemed appropriate to use as much factual source material as possible and we were helped enormously with this by Dr Tim O’Brien, reader in Astrophysics and guardian of the telescope. He helped us source schematics of the dish, pictures of it being constructed, images recorded by the Jodrell telescope and high resolution shots of Sir Bernard Lovell, which along with images and recordings that were sent into space on the Voyager space exploration crafts help keep this piece poignant and illustrate the global significance of this precision scientific instrument.

The telescope continued to collect data during the concert, an experiment to see exactly what the impact of all the mobile phones locally would have. After the Flaming Lips set, we projected a walkout look so that those leaving would be left with a real sense of the scale of the telescope as they drove away. Once given the all clear from us, the telescope turned it’s gaze back to infinite space…listening, ever listening.